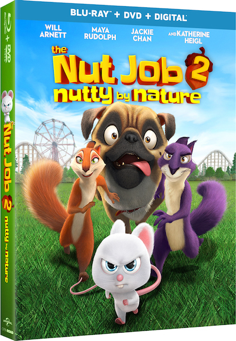 In case you missed it, Nut Job 2: Nutty By Nature ws released on Blu-ray October 31.  I really enjoyed the first one while flying to California once and this is a fun family friendly sequel involving new and familiar characters.  Two of the voice talents that really excited me about this movie in particular are Will Arnett, who returns as the main character Surly, and Jackie Chan.  Chan plays Mr. Feng, leader of a colony of territorial mice. It’s a follow up to the first film with the old gang and some new characters, who band together to save the park they call home from being destroyed and turned into an amusement park.

Surly the squirrel is on top of the world after the last nut job, beloved by the community at liberty park.  Maurie’s nut shop, where Surly oversees an all you can eat buffet is blown up and the animals must return to their roots, foraging for their food.  Meanwhile the wicked Mayor Muldoon is obsessed with profits and decides to turn the unprofitable Liberty Park into an amusement park called Liberty Land.  This is a serious conflict of interest for the animals and they plan attacks to stop the demolition of their home.  This leads the mayor to hire an extermination squad to get rid of the animals and Surly gets caught in a trap.

Various hijinks and drama ensue and suffice it to say that it’s not so cut and dry as animals thwarting the plans of the evil mayer.  It’s definitely not your standard predictable childrens movie.  And the Blu-ray comes packed with exciting features which include a feature commentary and two animation progression reels for those who really like to see how it is done.

Nut Job 2: Nutty By Nature is a universal release and I would say this franchise easily rivals anything put out by Dreamworks or Sony.  It’s a solid PG rating and I think it’s great for watching with the kids.