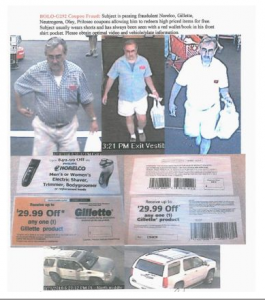 Budget Savvy Diva.com is known for many things including Fake Coupon Alerts

You can read all about them HERE

, 66 and you can see in the picture above,  who created fake coupons for national brands including Gillette, Olay and Norelco on his home computer that ranged in value from $10 to $70.

The coupons that Glenn used fooled everyone –

When Rodgers went to redeem them, the coupons would come up as invalid, but because of the high-quality of the forgeries, store managers would override the computer and accept them. It was when the store went to turn them in to the manufacturer that they would find out they were phonies. Isn’t that horrible!

20 to 30 different businesses — including Target, Kmart, Walgreens and Rite Aid — that officials believe Rodgers targeted with the fraudulent coupons.

They were really well made on glossy paper and even had a bar code on them,”

People create fake coupons not only to use but to sell… I know many of my readers use ebay as a resource but I personally would not use it.