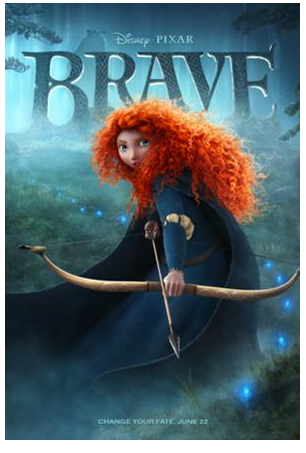 Pixar’s Brave has been a highly anticipated film with many firsts and almost firsts attached to it. For example, Brave is Pixar’s first fairy tale. It’s also their first film to feature a female protagonist and it almost was their first film to be directed by a woman, Brave screenwriter and Prince of Egypt co-director Brenda Chapman. All that excitement and hubbub aside, it is also the first time in over two decades that Pixar completely rewrote their animation system to create the most complex and stunning visuals ever for Brave.

Based on Scottish folklore, Brave tells the tale of a reluctant princess who craves adventure and excitement. When a foiled attempt to betroth her to one of the kingdoms suitors leads to a devastating clash with her very proper mother, the desperate Merida seeks the aid of a witch to change her mother Elinor (Emma Thompson) and alter her fate. The transformation that occurs is reminiscent to that of a demon bear that once threatened Merida and Elinor, taking their patriarch King Fergus’s (Billy Connely) leg. Merida must change her mother back before Elinor is completely overcome by her bear form and stuck that way forever

The artistry of Brave is magnificent, however it really blurs the lines between a dedicated Pixar film and what you would expect from Walt Disney Animation Studios. The release of the hilarious Tangled Short at the top of Beauty and the Beast 3D was another example of this apparent cohesion, as it contained all of the many enjoyable elements that come from watching a Pixar short. Brave is no exception. Its accompanied by the widely adored La Luna and is a definite must see.

Brave is an astonishingly beautiful picture worth seeing on the big screen. It’s fun for the family following more in the footsteps of Disney and traditional animation that Pixar’s previous ground-breakers, but hardcore fans will not be disappointed by the moving short.

Make sure to check the film 🙂