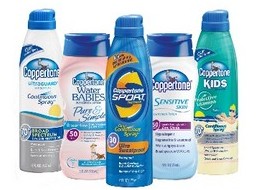 The amount of money you can receive from the Coppertone sunscreen settlement will depend on how many people file valid claims, so it cannot be determined at this time. However, the ONLY way to receive money from the settlement is to submit a Claim Form online or postmarked no later than March 4, 2013.

Claim Forms and more information about your rights in the Coppertone Sunscreen Class Action Lawsuit Settlementcan be found at www.SunscreenSettlement.com.